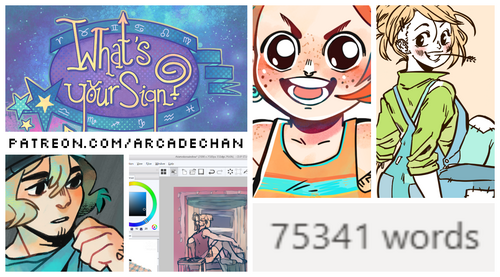 Well well well, look what the meteorite dragged in!

Been a while hasn't it? If you follow our twitter or tumblr, you might have already seen this, but What's Your Sign? is BACK in development baby!! Oh yes. Complete graphical overhaul (I'm better at drawing now!), revamped script (currently at 75k words!), and original music (I commissioned 12 different artists to write a piece for their sign!). This thing is getting DONE*.

Currently, I'm working on the first in-game week, which is, the official demo for what would be the full official game, officially. I have no idea if I'll ever finish the full game (which runs for a whole in-game year), BUT. I WILL finish this, and am in the process of doing so Right. Now. And it's going pretty good!

That said! If you would like to help it go a little faster, maybe consider joining my patreon. Why? WELL, HERE, are a few reasons. WHY:

So, if you'd like to stay super in the loop, see a bunch of stuff FIRST, see a bunch of stuff that will be No Where Else, AND help a little game-dev/artist! It would mean the world to me. That said, the only REAL purpose of this devlog is to let anyone following this project still (there are a lot of you??) know that there is! More to come. A lot more!!

Seriously, thanks for sticking with this thing. It blows my mind that everyday, this old project gets plays and views and followers. It really...is extremely inspiring. I want to do my best, so I'm going to try my hardest! And, eventually, I'll get to share something with you all that I'm pretty proud of. Thanks for reading. See you around~

Get to know the Zodiac like never before, as they get to know you too!

Yes! That's so exciting! I loved this game when I tried it out, so I can't wait to see what you can do now! You're doing great, keep it up (make sure not to overwork yourself though)!

What kind words...thank you so much!! things never go as fast as I hope, but I will get them done all the same. thank you for your support <3

Well, nevertheless, no matter how long it takes, I'll stick around to see how it goes!